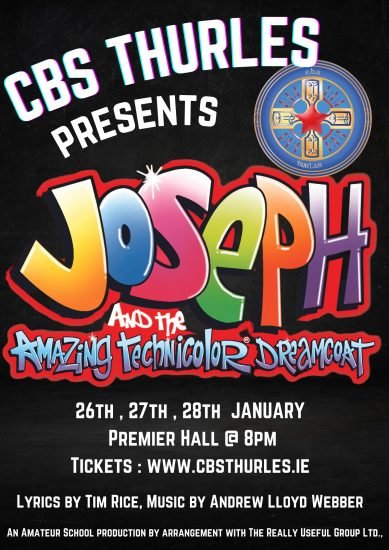 The musical follows the bible story of Jacob’s favourite son Joseph and his eleven brothers. Joseph is sold into slavery by his jealous brothers and ends up imprisoned by an Egyptian noble. While imprisoned he discovers he can interpret dreams and eventually becomes the Pharaoh’s right hand man as he helps end Egypt’s famine.

Joseph and the Amazing Technicolour Dreamcoat celebrated its 50th anniversary in 2019. Andrew Lloyd Webber and Tim Rice have created a number of successful musicals. Joseph was originally written for a school for performance by children and it is still regularly performed in schools today.

The story is based on the ‘coat of many colours’ story of Joseph in the book of Genesis in the Bible. It was the first of many collaborations between Rice and Webber to be performed publicly, although at first it was just a 15 minute cantata for a friend’s school in 1968. Webber and Rice continued to work on it and several longer versions were performed throughout the 1960s and 1970s before its premiere in the West End in its current format in 1973. In 1991 a further extended adaptation returned to the West End starring Jason Donovan which has become the most widely known version

Joseph and the Amazing Technicolour Dreamcoat will be performed by the students of Thurles CBS in the Premier Hall on Thursday 26th, Friday 27th and Saturday 28th January.